By 1927 the commercial market for hillbilly music was significant enough for one of the nation’s largest record companies, Victor Records, to send a record producer to the South to discover new hillbilly musicians to record. Ralph Peer was one of Victor’s A&R men: in charge of discovering the artists (singers and musicians) and the repertoire (songs and music).

In late July, Peer traveled to the town of Bristol, on the Tennessee and Virginia border. Renting a room where he could record, he and the two sound engineers with him transformed one of the large rooms into a recording studio, covering the walls with blankets to try to dampen and contain the sound and constructing a six foot platform for the recording turntable and megaphones. In the local paper, the Bristol Herald, Peer placed the following notice: 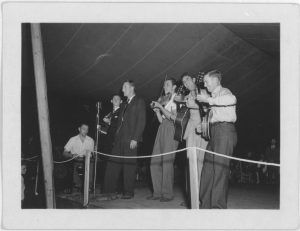 “Mountain singers and entertainers will be the talent used for record making in Bristol. Several well-known record makers will come to Bristol this week to record. Mr. Peer has spent some time selecting the best native talent. The mountain or “hillbilly” records of this type have become more popular and are in great demand all over the country at this time. They are practically all made in the South.”

During the first weekend of August 1927, Peer and his engineers were ready to start their project. The outcome was far more significant than anyone could have imagined. Hoping to find a few musicians and singers, perhaps a couple of string bands, Peer discovered the group and the soloist most responsible for the national popularization of hillbilly music. Among the many who showed up that weekend in Bristol were a family group, the Carter Family, and a singer and guitar picker by the name of Jimmie Rodgers.

It was the “birth” of modern country music.