Ch. 07: Honky-Tonk: Merging Two into One

Someone has said that one of the greatest casualties of WWII was the innocence of America. The trusting, good-natured, God-fearing, hard-working American family from the Midwest or Southwest with a solid sense of right and wrong, good and bad was becoming a tattered replica of its former self.

Men who had seen great loss or who had experienced the hell of war were ready to experience more than that which waited for them at home. After long hours of work, they wanted something more than a quiet dinner at home. There was a more hedonistic desire to hop in the pickup truck and head down to the local honky-tonk bar, where you could forget about being in the doghouse at home or work, have some laughs, drink some cold ones, tell some stories and perhaps catch the eye of some friendly woman. 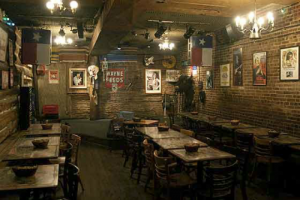 The honky-tonk or juke joint was a bar where locals hung out, particularly on weekends, to dance, listen to music and drink a lot of beer. A decade earlier, western swing bands might have provided the music, but these small establishments lacked the space or money to bring in a band like Bob Wills’ or Spade Cooley’s.

In addition, the noise on any given Friday or Saturday night was loud enough to drown out any fiddle band.  It has been jokingly said that a honky-tonk was a place where, when you walk in the door, they frisk you to see if you have a gun; if you don’t, they hand you one.