The easy term is “tone,” but the more accurate musical term is “timbre” (pronounced tam-burr). Sometimes people may talk about tone when they really mean pitch, but whether you call it tone or timbre, the concept is the same: the musical quality that makes one instrument or voice sound different from others.

Without getting into a complex discussion of the physics of music (it’s something called fundamentals and overtones), the definition of timbre is the color of the sound being produced.

Normally, we think of color in visual terms. Red is a visual color, so is blue and yellow. Unless we are completely color blind, we can clearly differentiate between a blue ball, a red ball, and a yellow ball. 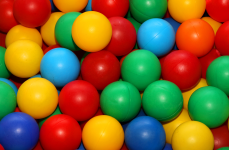 It’s also possible to discuss voices in terms of timbre. Voices are said to be mellow, rich, dark, resonant, shrill, harsh, thin, bland, or dull. The performers may be vibrant and energized, but their voice can be either warm or piercing. These are examples of different types of vocal timbre or aural color.

A flute plays a melody:

A trumpet plays the same melody, but has a different tone from the flute:

A nylon-stringed guitar plays the same melody as the trumpet or flute, but sounds different because they all have different “tone” or “timbre”:

Musician and composer Jacob Collier demonstrates the concept of fundamentals and overtones, which determines musical timbre: