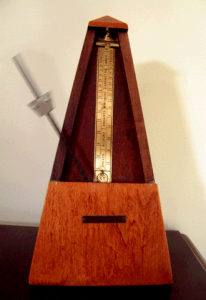 In addition to being able to analyze the structure and instrumentation of a song, it is also possible to examine the speed of a piece of music or how fast it is being played.

The word used for speed in music is tempo, which is an Italian word rooted in the Latin word “tempus” or time. So, when we talk about the speed of music, we speak of the tempo at which it is being played. Example A had a tempo of 60 bpm; Example B was being played at 90 bpm; and Example C had a tempo of 120 bpm.

It is important to note that songs rarely stay at one steady tempo throughout the entire music. Often a song may change speeds or tempi (plural of tempo) suddenly, perhaps with a change from verse to chorus, or with the introduction of a new emotional lyric. More frequently, music changes tempo gradually, either speeding up, which may signify an increase in excitement or energy; or slowing down, creating a feeling of contemplation or possibly sadness.

Tempos and tempo changes are important in creating the proper “feel” of the music; therefore, performers have a responsibility to choose the most appropriate tempos and tempo changes to communicate to the listener. A tempo taken too fast can be absurd and silly, while a tempo too slow may be bogging and funereal.