In 1892 Sousa left the Marine band to form his own concert band for performing and touring. His band tours to Europe and Britain allowed audiences outside of America to hear Sousa marches and band arrangements of Joplin rags for the first time.

Unlike both Joplin and Foster, Sousa had a mind for business and financial matters. So secure and respected was Sousa in his profession that when he formed his own band, the public was able to purchase stock in his professional ensemble. His wise business and marketing sense kept the band members well paid and made Sousa extremely wealthy in later life. At a time when a dollar could buy a five course meal at a fine restaurant, Sousa was offered $100,000 in advance for the exclusive rights to one of his compositions.

When the fledgling recording industry was seeking to establish its reputation in America, it went to the March King to inquire about the possibilities of recording some of his band’s performances. Sousa thought very little of the new technology. “Why would someone buy a mechanical reproduction of a recording,” he reasoned, “when they could attend the genuine thing?”

In spite of his reservations, Sousa agreed to allow the new Columbia Record Company to record one of his marches. Columbia’s recording of Sousa’s “Stars and Stripes Forever” march was a monumental success, becoming the first million selling record in history and giving instant credibility to the new technology. So enthused was Columbia that they offered John Philip Sousa the first contract in recording history. John Philip Sousa had become the first superstar of the American recording industry.

Sousa’s importance to American music extended beyond the march music and being America’s first world ambassador of music. He certainly had a role in the legitimization and popularization of the record industry; many American’s bought their first home record player in the late 1890’s just to hear Sousa’s marches. But, the part that John Philip Sousa played in the establishment of copyright laws in America effectively changed the path of music in the 20th century. 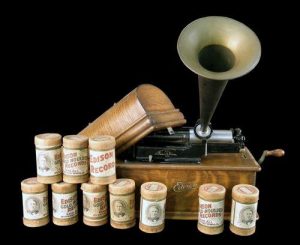 Sousa and many other composers realized the loss of income and control due to these independent recording companies and joined several U.S. senators in lobbying Congress to change copyright law in 1906. Appearing before a congressional committee on copyright law in 1906, an attorney for the group stated that the maverick recording companies were “sponging upon the toil, the work, the talent, and genius of American composers,”1 John Philip Sousa, living icon of American music, “March King” and friend of many in Washington, D.C. put it more succinctly: “When they make money out of my pieces, I want a share of it.”2 Words that came fifty years too late for Stephen Foster were part of the force which changed copyright law in America.

The resulting copyright law of 1909 was a compromise, giving secondary recording companies the freedom to record the compositions and arrangements of musicians, but guaranteeing that royalty payments would be paid to the composer and arranger for each recording sold. This law allowed performing artists and recording companies to create covers (new recordings) of well known songs, but not without paying compensation.

John Philip Sousa was the bridge between the fledgling music industry of the 19th century and the modern era. His music was some of the most successful in the first two decades of the recording industry and, even though he personally disliked the record player, his music helped to legitimize the technology. The result of his efforts to reform copyright law provided for royalty payments to composers and arranger from both the recording and pianola industries.

Sousa was a composer, conductor, entertainer, businessman, cultural statesman and America’s first superstar. His marches signify not only the finest models of the genre, they have remained for over a century as the musical heartbeat of America.