The urban folk movement, which was started when Guthrie moved to New York City in the early 1940s, eventually culminated in the political folk movement of the early 1960s. Along the way, several other notable singers joined the band of folk troubadours. 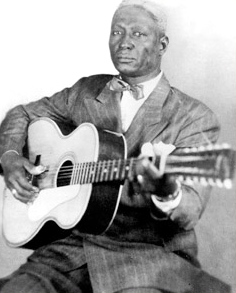 Among the important figures in the early modern folk movement of the 1930s and 1940s was African-American Huddie Ledbetter, better known as Lead Belly (his preferred spelling, though it is also commonly spelled “Leadbelly”). Significantly older than the others (he was already 51 when he met up with Guthrie and Seeger in New York City in 1940), Lead Belly brought a wealth of songs and life experiences to the young musical activists movement. He had served parts of three prison sentences for violent crimes, but had been discovered by the Lomaxes on one of their tours of Texas prisons. After obtaining a pardon from the governor (he submitted his petition-song on a record), Lead Belly began touring with the Lomaxes through the northern states. By the time he arrived in NYC, Lead Belly had appeared on a newsreel film, March of Time, and had several recordings and radio appearances to his credit.

While in New York, Lead Belly appeared in workers’ benefits concerts with Guthrie, Pete Seeger, and actor/folk-singer Burl Ives. Following the war, he toured France, but died in 1949 at the age of 60 of ALS, also known as “Lou Gehrig’s disease.” His combination of folk-blues was an influence on others such as Seeger.

The year following Lead Belly’s death, Pete Seeger and a group of singers called The Weavers recorded Lead Belly’s “Good Night, Irene” and saw it rise to #1 on the popularity charts.

Musicians as diverse as George Harrison, Van Morrison, and Kurt Cobain have covered Lead Belly songs, recognizing the impact he has had on folk, blues and rock music.

The youngest, and perhaps most politically active of the three significant individuals of the early modern folk song movement was Pete Seeger. In contrast with both Guthrie and Lead Belly, Seeger was born into New York City affluence; his father was a respected musicologist and Harvard music professor, and his mother, a violin performer, teacher, and one of America’s most important pioneering woman composers. His father’s involvement in the Composer’s Collective, an attempt to write radical folk songs that conformed to political and musical theory, influenced young Pete to find his own voice, instrument, and cause.

The cause was the fledgling worker’s movement which sought to organize the workers into unions that would force big business to grant the common worker fair wages and safe working conditions. In the early years of the movement, the newly formed Communist party in America was the passionate force behind the rallies, meetings and benefits. Seeger and his banjo joined others like Lead Belly and Guthrie to sing out at the rallies for fairness for the common man.

Seeger, like Guthrie, was an avid anti-fascist, speaking out against injustice wherever it might exit. It is doubtful whether Seeger, who identified with the common worker, sided, or even knew of the ultimate goals of the leaders of the American Communist Party. Though a member of the party for several years, he rarely attended party meetings, preferring to be involved only in the performing aspect of the union movement. Together with Guthrie and others, Seeger formed the Almanac Singers, performing union songs like “Whose Side Are You On?” and anti-Nazi songs such as “Round and Round On Hitler’s Grave.”

The Almanac Singers broke up when Seeger joined the army and Guthrie went off to the Merchant Marines. Immediately following the war Seeger helped form People’s Songs, Inc in 1946 and began holding “hootenannies.” These were casual performance/sing-a-longs where the performers led the audience in participation singing. It was the musical manifestation of the socialist movement, where the strength of the mutual experience was more important than the exclusivity of the single performer. All voices were united as one, synchronized in socio-musical expressions like “Union Maid” and “If I Had a Hammer.”

In 1948 Seeger formed a new group, The Weavers, which had several million-selling hit songs with Decca Records including the East African folksong “Wimoweh” and Leadbelly’s “Goodnight, Irene” in 1950.

But the rise of McCarthyism in the early 1950s caused a drastic turn in Seeger’s fortunes. Sen. Joseph McCarthy led a misguided crusade in Congress against all forms of “anti-Americanism” – some real, but mostly imagined and particularly those supportive of such subversive activities. Many in the American arts culture (music, theatre, film, literature, etc.) were singled out as a way to bring media spotlight on their efforts. As his involvement in the Communist party became known, The Weavers’ contract with Decca was not renewed, scheduled concerts were canceled and concerts that were held frequently brought physical threats and violence to Seeger and the group.

An informant for the McCarthy hearings in Washington D.C. accused Seeger of being a Communist subversive, whose goal was to undermine and overthrow the government of the United States. Years later, the same informant would renounce his testimony and serve five years in prison for perjury.

However, the accusations against Seeger and other folk singers were serious. His involvement with the union movement and peripheral association with the Communist party in the late 1930s were enough to subpoena him to appear before the House Un-American Activities Committee in 1955. Seeger appeared but refused to answer the questions put before him, claiming the Fifth Amendment and stating that the whole proceedings violated his right to privacy as an American.

“I am not going to answer any questions as to my associations, my philosophical or religious beliefs or my political beliefs, or how I voted in any election or any of these private affairs. I think these are very improper questions for any American to be asked, especially under such compulsion as this.”

He was found in contempt of Congress and sentenced to prison; the sentence was never carried out and eventually was dismissed on appeal in 1962.

But the damage of the accusations and negative exposure was complete. Pete Seeger was labeled a “pink-o communist sympathizer” just as the Cold War was beginning between the U.S. and U.S.S.R. Concert promoters refused to include Seeger or any group in which he was a part. Radio and television stations blacklisted his songs and appearances. His only performances were as part of an informal underground folk movement -in the coffee houses and occasional college campus concerts where the arm of the right-wing movement couldn’t silence him.

Following in the footsteps of Sousa, Armstrong, and other American musicians, Seeger took American folk music abroad in the early 1960s, traveling to Europe, Britain, and Russia. In a Moscow concert, he was able to get the non-English speaking audience of 10,000 singing the folk-spiritual “Michael, Row the Boat Ashore,” in a four-part round.

During the resurgence of the political folk movement of the early 1960s, Seeger assumed the role of mentor to the second wave of musical activists: Bob Dylan, Joan Baez, Judy Collins, and the group Peter, Paul and Mary.

In 1950 Seeger had helped form the folk music magazine Sing Out!, and in 1962 also helped form Broadside, a folk song magazine which gave first exposure to the songs of Dylan and other young songwriters.

Seeger’s blacklisting by television, which lasted for 17 years, prohibited his appearance on the popular folk music based show, “Hootenanny” which was named and modeled after the concerts he and Guthrie had begun in the late ’40s. From its inception in 1963, the TV show was never able to schedule Dylan, Baez, Collins or other young singers as guests because of their refusal to appear without their older mentor.

Seeger’s songs, however, did find their way into the recording studios, radio stations, and onto the Billboard charts. His song “If I Had a Hammer” was a hit for Peter, Paul and Mary in 1962. “Where Have All The Flowers Gone” recorded by the Kingston Trio was in the top ten in 1962. “Wimoweh” (“The Lion Sleeps Tonight”) was successfully covered by the Tokens in 1961. “Turn, Turn, Turn” was a folk-rock million-seller for the Byrds in 1965. 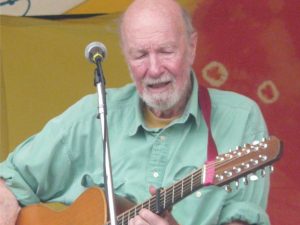 From the early years of the Newport Folk Festival, in the mid-1950s, Seeger was a presence and a constant force. By the late 1960s he found favor with the music industry; he began recording with several labels, and produced dozens of albums over the following twenty years.

Several of Seeger’s projects involved Woody Guthrie’s son, Arlo Guthrie, and also a young singer-songwriter named Don McLean, who would later write and record an epoch song, “American Pie.” (Although it paid tribute in a metaphorical way to the pioneers of rock ‘n roll, it was recorded in true folk manner–with an acoustic guitar.)

The first wave of the modern folk music movement was complete. The dust bowl troubadour songs of Woody Guthrie, the urban social activism songs of Pete Seeger, and the passionate folk-blues sounds of Lead Belly had created a foundation for the second wave of socially conscious voices which had America’s ear in the early 1960s. But, before the second wave could be taken seriously, America would need to redefine its understanding of folk singers as suspiciously Anti-American.

Pete Seeger, Bruce Springsteen and others perform Woody Guthrie’s “This Land is Your Land” at the inauguration of President Obama in January 2009.