The Influence of Radio

In the early 1920s, several radio stations in the south were featuring live performances of hillbilly musicians. Starting with WSB in Atlanta in 1922 and then many others including WBAP in Forth Worth, Texas and WSL (owned by Sears & Roebuck) in Chicago, these variety shows were billed as radio “Barn Dances”, attempting to replicate the Friday or Saturday night social events which were often the only social interaction for rural folk of the South.

The radio “Barn Dances” were primarily instrumental programs, showcasing fiddlers, guitar and banjo pickers and mouth-harp (harmonica) players showing their talents on up-tempo dance tunes. Only rarely would a singer be included in the program. But the tremendous popularity of these Saturday night radio shows caused the popularity of some early hillbilly artists.

Early performers in the Opry included the harmonica player, DeFord Bailey, the first black country performer to appear on radio, “Uncle” Dave Macon, the first superstar on the Opry and supposedly the “king of the banjo-pickers and fiddler Brother Kirk. Groups such as The Fruit Jar Drinkers, The Gully Jumpers, The Possum Hunters and the Dixie Clodhoppers were primarily instrumental in nature, occasionally including one verse of a singer in the middle of five or six instrumental verses.

As singing became more of an emphasis in the recordings of hillbilly and then cowboy singers, the radio programs slowly adjusted to reflect the change. Hay was always careful to reflect the rural roots and down-home, southeastern American values. The set for the radio program, which eventually was performed live in front of an audience, was that of a rustic barn, complete with barrels, barn windows and rough board walls. Hay always encouraged the performers to “keep it down to earth”, meaning making it comfortable to the farmer, rancher and factory worker and their families who were gathered around the radio that night.

In the decades to follow, the Grand Ole Opry was the starting point for every new country and western artist and every new style of C&W music. Roy Acuff, the “King of Country”, appeared in 1938 with his Smoky Mountain Boys string band. Acuff was to be the pivot point from old-tyme (string band emphasis) to new style (with an emphasis on the singer) Opry. Eventually Acuff took over the role of Opry announcer from Hay and became the Voice of the Grand Ole Opry for nearly 40 years.

From the ’30s on, the Opry was the mecca for every C&W artist from Bob Wills, Bill Monroe and Patsy Cline to Alabama, Reba McEntire and Garth Brooks in the 1980s & ‘90s. 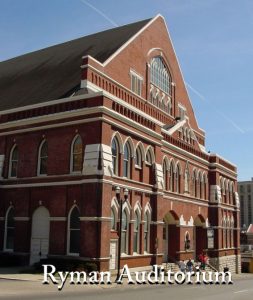 In the ’40s an Opry movie was made, Opry artists were part of the USO shows traveling to servicemen overseas in WWII and the Grand Ole Opry took over the Ryman Auditorium for its live broadcasts. The Ryman, with seating of over 2,300, would be a country music shrine for the next 30 years. In addition to traveling shows, live radio broadcasts and movie appearances, the Grand Ole Opry welcomed television into their performances in the mid 1950s. In March 1974, the Opry moved into their current facilities, a 4,400-seat auditorium at Opryland USA theme park.

As each new country & western style was unfolding, its ultimate test of longevity would be the Opry. Bob Wills and western swing, Bill Monroe and bluegrass, Ernest Tubb and his electric guitar and honky tonk sound all faced the microphones and audience at the Ryman. Although Hay, Acuff and the audiences were rigidly traditional at first, each of these artists were eventually welcomed as part of the Opry family.

The success of country and western music and the success of the Grand Ole Opry are inextricably intertwined. As the popularity of one grew, the seeds were being planted for the next growth spurt for the other. Like two boots, shuffling along together, the music and the medium progressed side by side in a way that set a pattern for the pairing of early rock ‘n roll and television or contemporary rock and MTV.