Blues   Ch. 03: What are the Blues?
In Progress
Chapter
Materials

To understand what the blues are, one needs to look at the lyrics, the instruments, the melody and harmony and the structure called “the twelve bar blues.”

The blues lyrics are dark, often dismal reflections that center on pain or loss. Typically, blues lyrics are about three subjects: lost or unrequited love, personal loss (job, money, etc.) or physical pain. Even a cursory look at typical blues song titles shows this to be true: “Moanin’ For My Baby”, “New Prison Blues”, “Bad Luck Blues” and “Blues in the Dark” reflect these subjects.

Also important to the current of blues literature were the songs in the 1920s and ‘30s which either openly or with the use of double meanings, celebrated the body and human sexuality. True to the title of “devil’s music”, these songs rarely were encumbered by such things as religious morals and acceptable standards.

Classic blues songs like Muddy Waters’ “I Can’t Be Satisfied” or “Rollin’ and Tumblin’”, Lizzie Miles’ “You Gotta Come and See Mama Ev’ry Night” and Lightnin’ Slim’s “Rock Me Mama” were some of the hundreds of risqué songs which were typical of the standard offerings in black juke joints throughout the south in the 1930s.

In addition to the uniqueness of the lyrics (most of which would never have been sung in “proper” situations), was the uniqueness of the instrumentation. In the beginning, it was simply voice. Like the workers in the field, it was first a singer’s lament unaccompanied by any instrument. By the early 1910s many singers of the blues were also accompanying themselves on the guitar, which was both inexpensive and portable. The guitar was the perfect accompaniment to the moans and wails of the blues singer. Although the guitar was more European in nature than the banjo, which appears to have strong ties to the African continent, the guitar produced both a richer and louder sound than the banjo. 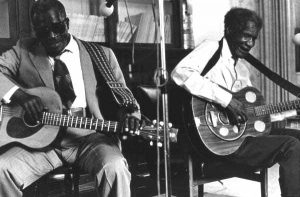 The style of guitar playing developed by the early bluesmen was also unique from Western music. A typical guitar neck is separated by 21 frets into separate sections. Guitar players in the typical Euro-tradition would play with a sense of accuracy, jumping from one chord or played note to another by simply stopping the string vibrations at frets to create different pitches.

Blues guitarists learned to play in a tradition that stemmed back to the tradition of African stringed instruments which were without frets or accurate note separations. In keeping with their tradition, notes tended to tune and retune as the strings were bent sideways on a melody. When a knife or piece of metal or the neck of a beer bottle were slide along the neck, the melody had the feel of gliding from one note or chord to another, rather than “jumping” in the typical fashion. This pitch elasticity was an important part of the fusion of music and emotion for the blues performer. In fact, it is in the bent notes and sliding chords that the inner burdens find their most accurate musical externalization. They are to instrumental music what the moan, cry and wail is to vocal music: the hounds of heartache finally released from the prison within.

The third sound typical of the early bluesmen was even more portable and inexpensive: the harmonica. Known by most as a “blues harp”, the harmonica player provided an instrumental counterpoint to the vocal line. Between lines of text, a singer may play a few licks on the blues harp to add a musical exclamation point. Alternatively, the singer may take a break from a blues verse completely, letting the harp do the singing instead.

As the blues moved out of the rural delta region, additional instruments were added to the mix. The “classic” blues of W.C. Handy and Bessie Smith incorporated piano, trumpet, trombone, drums and occasionally strings to create a blues/jazz/pop mix. Though the sound of Handy’s blues was an important stepping stone which opened doors for jazz in cosmopolitan America, it was far from authentic blues.

Closer to the acoustic sound of the delta blues was the power urban sound of Chicago or Memphis blues. The invention of the amplified electric guitar gave a new, louder surge to the guitar sound. Singers and harp players also used microphones to balance the electric guitar. To fill out the mix, drums, bass guitar and brass (trumpet or trombone) and saxophone were added. The result was a high energy, driving power style of the blues. It was to delta blues what big band jazz was to New Orleans jazz: an intimate sound clothed in rhythm and volume.

Like jazz, the blues could conceivably be played with a flute, tuba and kazoo, but its most authentic sound is heard with a combination of these key instruments: voice, guitar (acoustic or electric), harmonica, keyboard (piano or electronic organ) and added brass/sax instruments.

It is not just the choice of instruments that makes the sound unique, but how the blues player/singer treats a melody and the choice of chords.