In the beginning, there was basically just one shade of the blues. It was called “Delta” blues and originated in that area on either side of the Mississippi River in the delta region of Mississippi and Louisiana. However, it was not restricted to the delta region as early delta bluesmen took their sound as far west as Texas and as far east Tennessee and the Carolinas. Before long, delta blues could have been more accurately called “rural” or “country” blues because of the migration that was taking place to other rural areas of the south.

But, ironically, it wasn’t a delta bluesman who first took the blues to a level of popularity in America.

W.C. Handy was, by any account, the closest thing to an African-American aristocrat entertainer that 1900 America knew. Born in Alabama, Handy was trained formally in music on the cornet, the piano and composition before getting jobs with various minstrel and traveling tent shows in his early ‘20s. By the early 1900’s he had developed a nine-piece band which provided entertainment and dance music for the more elite in the African-American community.

The story goes that one night in 1903, while waiting for a train in Tutwiler, Mississippi, Handy was woken from a nap by the unusual sound of a man at the end of the railroad platform. The singer was singing such a sad melody in such an unusual way and accompanying himself by strumming a guitar while sliding a pocket knife up and down the neck. Handy apparently scribbled some of the lyrics, melody and chord structure down on a piece of paper in his vest pocket. When he got home, he crafted the scribbling into a formal piece of music. For the next couple of years, Handy incorporated elements of what he heard from blues artists around the south into novelty songs which appeared in his variety shows. 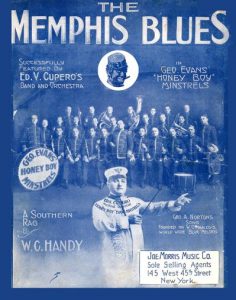 It wasn’t until 1912, with the publishing of his “Memphis Blues” that blues was given any attention by the mainstream American public. Within a couple of years, Handy had successfully published a dozen composed blues songs, including “St. Louis Blues” which formally launched a “blues craze” in middle and upper class America.

While Handy’s compositions definitely contained elements of the delta blues, they were but a polished, sanitized, concert version of the raw delta blues. With trained black singers like “Ma” Rainey and Bessie Smith, the blues by W. C. Handy and a few other “blues composers” began to fill the concert, recital and music halls of Boston, Philadelphia and New York City. Popular they were; authentic, they weren’t.

Regardless of the acclaim, Handy’s “blues product” was as similar to the original as a slice of “processed cheese product” resembles the taste of a slice of good sharp cheddar cheese.

Bessie Smith – “Empress of the Blues”

Bessie Smith had traveled from Tennessee to Atlanta to Philadelphia and New Jersey just in time for the blues craze of the early ’20s. Her voice was striking, her personality charismatic, her lifestyle loose and wild; all perfect characteristics for a blues singer. Although she was not the first female to record a blues song, when she did finally record a song, “Down Hearted Blues” in 1923, it sold over 750,000 singles in six months. Over the next seven years, Smith recorded over 150 songs, many with jazz greats like Louis Armstrong and Fletcher Henderson. Just before the stock market crash of 1929, Smith recorded her last hit song, prophetically entitled “Nobody Knows You When You’re Down and Out.” With the Depression, record companies failed, recording contracts were dissolved and singers went unemployed. In the seven years of her recording and performing blues songs, Smith set the standard for every female blues and blues-influenced singer from Billie Holiday to Janis Joplin. She is remembered today as the “Empress of the Blues.”

The widespread exposure given this popular form by W. C. Handy earned him the title of “Father of the Blues”, whether or not he actually deserved it. Just as Stephen Foster was recognized as the “Father of American Popular Music” even though he didn’t actually invent American popular music, but played a crucial role in its rise to respectability, Handy was the first to treat this rural folk music with class, giving it an air of credibility in the ears of the public.

Since his death, he has been honored on a United States postage stamp as “Father of the Blues,” a statue of him exists in a Memphis park and the most prestigious honors in blues music are given out at the annual Handy Awards in Memphis.

Before W.C. Handy wrote down those notes on a piece of paper in a train station in 1903, blues did exist. But there was no name, no face, no voice to record and recognize as an authentic bluesman.