In the late ‘60s, with the Beatles, Stones, Motown and Soul artists all gaining sophistication and market share with the late teens, some in the corporate music industry felt the younger, pre-teen market (age 10-15) might be ready for a pop-rock style of their own.

At first it was an attempt by television executives to capitalize on the popularity of the Beatles’ movie A Hard Days Night in which the foursome appeared to be silly and slapstick with a barely existent storyline. In the fall of 1965 500 actors auditioned for the canned group. Among those turned down were Stephen Stills (later part of Crosby, Stills and Nash) and Danny Hutton (later part of Three Dog Night). The television execs were not looking for musicians, they were searching for a look-alike quartet with photogenic looks, cute personalities and a goofy harmlessness. Whether they could sing or play instruments was unimportant for they would be “air-playing” and lip-syncing to a track while on camera.

The gimmick worked and The Monkees were hatched. With songs written by an unknown Neil Diamond, Mike Nesmith (one of the group who was actually a musician) and others, the foursome had chart success with “I’m a Believer,” “Last Train to Clarksville,” and “Daydream Believer” (all hit #1 in 1966-1967). Radio airplay was augmented by their weekly (Saturday morning) television program stylistically patterned after the Beatles’ movie. The television program and group stayed together only two years but finished in 1968 with the movie Head (written in part by actor Jack Nicholson). The movie was a surrealistic romp of wacky humor accompanied by some of the group’s most intriguing music. Although a box office flop, Head is recognized today by some as a groundbreaking experiment in music videos.

The incredible success of the Monkees led others to target the same demographic group with saccharine soaked pop-rock. Jerry Kasenetz and Jeff Katz, producers with Buddah Records recruited a singer-songwriter with an amazingly non-descript nasal solo voice named Joey Levine to sing led on several studio creations and under different names. With the studio group Ohio Express he sang lead on “Yummy, Yummy, Yummy” (#4 on pop charts) and with the fictional group 1910 Fruit Gum Company he sang lead on “Simon Says” and “1, 2, 3, Redlight” (#4 and #5 respectively on the pop charts).

The characteristics of bubble gum pop (supposedly called so because of the target age group and their penchant for the product) were simple:

Following quickly in the pattern of the Monkees, 1910 Fruit Gum Company and Ohio Express (not to be confused with the funky Ohio Players) were several other studio-manufactured bands targeted at the pre-teen crowd. 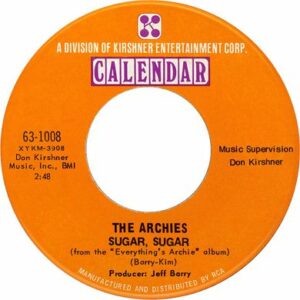 The Archies (a studio-only band which manifested itself only in a Saturday morning cartoon based on the comic strip) had the #1 single of 1969 with “Sugar, Sugar” which sold over 6 million copies. Amazingly, although the group never existed outside the walls of a studio and certainly never performed live, they produced four albums from 1968 to 1970. The last of which was titled “The Archies’ Greatest Hits”. 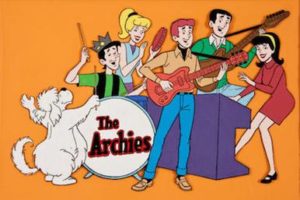 A spin-off of the Archie comic book series, Josie and the Pussycats also aired the fall of 1969, complete with its own studio band and collection of “hit songs” (which conveniently aired every Saturday morning) but it never matched the success of the Archies. The three young ladies on the cover of the Capitol released 10-song LP were models brought in for the photo shoot. One of the voices for the studio Pussycats was Cheryl Ladd who, ironically, starred a few years later as a replacement in another 3 female group on television: Charlie’s Angels.

Other Saturday morning cartoon programs with characters playing bubble gum pop music included the Banana Splits (four actors dressed up as a beagle, elephant, lion and gorilla mimed playing and singing on camera), Cattanooga Cats, Scooby Doo, Fat Albert and the Cosby Kids, the Flintstones, the Globetrotters, the Hardy Boys, H.R. Pufnstuf, and the Jetsons. Each of these cartoon groups released an album of up to 24 songs that kids could purchase, most often, for 50 cents and two box tops from a breakfast cereal company. Some cereals contained a free 45 r.p.m. record in the box.

The Partridge Family (with David Cassidy and real-life stepmother Shirley Jones) had a 1970 #1 hit with “I Think I Love You,” and a #13 hit a year later with “I Woke Up in Love This Morning” but the show, the family and the sound evaporated by 1974. Cassidy attempted to push his teen idol image beyond the series and for a couple years gained marginal solo success both in the studio and concert tours.

Some of the other bubble gum groups of the ’66 to ’74 period were the Cuff Links (“Tracy”), the Royal Guardsmen (“Snoopy vs. the Red Baron”) and the Cowsills (“Hair” and “The Rain, the Park, and Other Things” otherwise known as “The Flower Girl”) and Steam. “Na Na Hey Hey Kiss Him Goodbye,” Steam’s only real hit song, was purposely written as an inferior “B” song on their 45 rpm record so that the deejays would be forced to play the “A” side. The “na, na” and “hey, hey” lyrics were inserted when they ran out of ideas in rehearsal and then never got around to replacing them. Taunting sports fans at the end of a hometown rout still sing its chorus to opposing teams.

This perhaps demonstrates the place of bubble gum pop-rock in American music history. Although it created no profound musical moments, it was never the vehicle for the launching of a superstar, it was never awarded a Grammy, and is largely viewed as insignificant musical fluff by serious rock aficionados, it played a unique role in American pop-rock history. Though the names of the groups and almost all of the individuals involved have receded into America’s collective past, the carefree tunes and the easygoing lyrics can still create the same feelings of lighthearted optimism.

Most likely it was cultural escapism that caused pre-teens, teens and conservative families to seek out songs by the Monkees, the Archies and Ohio Express in the late ‘60s and early ‘70s. During the eight years of bubble gum rock America saw the assassinations of Martin Luther King and Robert Kennedy in 1968, civil unrest, protests on campuses and riots in the streets, the ongoing war and increasing casualties in Viet Nam, the Kent State massacre in 1970 and the political disaster of Watergate in 1972. Under circumstances such as these, cultural escapism might be allowed. Like the plastic bottle designed for short-term consumable use, the bubble gum song might last forever.