It is called “Rock and Roll,” “Rock ‘n’ Roll,” “Rock & Roll” and sometimes, simply “Rock”. But, like the term “pop” music, the term “Rock ‘n’ Roll” is broad enough to include decades of diverse musicians, singers and groups, dozens of sub-styles, and tens of thousands of songs.

The terms “rock” and “roll” have referred to movement of a boat on the sea, the comfort given by a mother, the ecstasy of a spiritual experience and finally, as a euphemism in the black community for sex.

Originally, the terms “rock” and “roll” were used by sailors to describe the forward and backwards (rock) and the side-to-side (roll) movement of the boat. In English literature of the 17th century, the terms were often applied to a ship’s activity in the water and occasionally to a mother’s rocking (forwards and backwards) of a young child.

By the late 1800s, though, the terms were beginning to appear in spirituals, applying them to the safety and surrender of being “in the arms of Jesus.” One spiritual, “The Campmeeting Jubilee” says:

We’ve been rockin’ an’ rolling in your arms,

Rockin’ and rolling in your arms,

Rockin’ and rolling in your arms,

In the arms of Jesus.

In the African-American gospel tradition, rocking and rolling referred to the spiritual ecstasy and powerful rhythm that came from singing and being moved by the Holy Spirit. “Rock Me, Lord,” “Rock My Soul in the Bosom of Abraham” and “Rock Me in the Cradle of Love” were spirituals widely sung in religious gatherings in the early 1900s.

About the same time, black secular musicians, familiar with the usage of the term in church services, were borrowing it to use as a euphemism for dance or sex. “Rock That Thing” (Lil Johnson 1929); “Rock Me Mama” (Banjo Ikey Robinson 1929); “Rockin’ In Rhythm” (Duke Ellington 1928); “Rock Me In The Groove” (Sweet Georgia Brown 1941); and “I Want To Rock” (Cab Calloway 1942) are just a few of the secular examples of the term used prior to the 1950’s. Trixie Smith’s “My Daddy Rocks Me (With One Steady Roll)” in 1922 used double euphemisms in the title, one for her lover and one for sex.

It was Wynonie Harris’s 1947 recording of Roy Brown’s classic “Good Rockin’ Tonight” which first applied the term to sex and dance in a rhythm and blues song. Within a few years, the terms “rock” and “roll” were widely understood in the black secular music world as acceptable lyric substitutes for sex.

Although the broad term “race music” covered all music performed by African-American performers in the first half of the 20th century, the term “rhythm & blues” was widely used as early as 1949 to refer to any type of black music apart from either jazz or gospel. Whether the music was crooners, jump blues, boogie-woogie piano or ballads, the same blanket term, rhythm and blues, was applied. 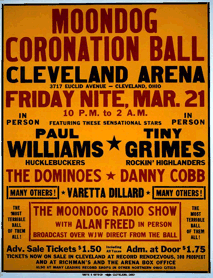 When a new sound began evolving in the early 1950s, radio disc jockeys, responsible for selecting, spinning and sometimes promoting new songs, looked for a term which would distinguish it from “rhythm & blues,” which was unacceptable to play on the major radio stations before midnight. The term that Alan Freed, DJ at Cleveland’s WJW, began using as a code word for “rhythm & blues” was “rock & roll”. Freed, whose radio nickname was Moondog, began widely promoting both the term and the music with his Moondog’s Rock and Roll Party events where both black and white teenagers could hear the artists live in concert. His first major event, Moondog Coronation Ball, was attended by over 25,000 mostly white teens, far more than the 10,000 who could be accommodated by the hall. The resulting riot was just the first of his unfortunate encounters with the law.

The term “rock ‘n’ roll” was first applied to such broad divergent sounds as “Earth Angel” by the Penguins and “Shake, Rattle and Roll” by Big Joe Turner and became widely accepted by radio disk jockeys, white and black teens, and eventually the entire public. Rock ‘n’ roll, just another term for rhythm and blues, was widely known in the black community by 1953 – the year Elvis walked into Sun Records in Memphis. Presley may have been the date that brought rock ‘n’ roll to its first national dance, but by then it was already well experienced in the ways of dancing, rhythm, and love.