Rock ‘n’ roll in the 1960s was nothing if not a study in contrasts. The two contrasting prongs of the British Invasion –blues-rock and pop-rock were in counterpoint with the two sides of African-American rock music: Motown, a polished pop form of gospel and soul, a gritty rhythm & blues form of gospel.

The contrast study is also evident in the difference between the music of psychedelic flower-power advocates of peace and love and the music of those who, with lyrics and carefully chosen sounds, revealed a dark, dismal and disturbing side of late ‘60s American culture.

The movement began in a location that was the antithesis of San Francisco’s beautiful Golden Gate Park, the concrete streets of New York. Far from the flower and pot-empowered voices of the California hippie counterculture was a group of pessimistic fatalists celebrating the concrete existence of the inner city. 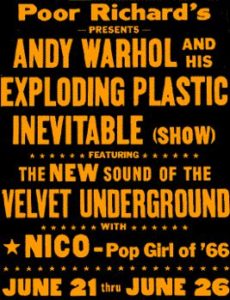 The avant-garde ensemble was built around two figures: Lou Reed, a lyricist with a penchant for Dylan-esque poetry weighed down with metaphors of the morose and John Cale, a musician who developed a sound based on minimalist repetition and eclectic instrumentation. Both Reed and Cale were university trained, Reed at Syracuse University in poetry and Cale first at a music school in London and then with the classical composer John Cage in New York City under a Leonard Bernstein scholarship. Even as a classical music student Cale linked himself with radical elements of the music community; destroying a piano in the middle of a recital in London and participating in a 19-hour long performance of an Erik Satie classical work entitled “Vexations”.

The meeting of the two in the lower Manhattan art community was inevitable and significant. Reed’s passionately dark lyrics, combined with Cale’s sparse and repetitious sound were in stark contrast with the colorful optimism of the West Coast. Instead of striving for the better world of psychedelic idealists, the two were attempting to create a realistic reflection of the world around them; a world characterized not by hope and communal connection but by alienation and despair.

The Velvet Underground, “Waiting for My Man” 1967

Others soon were drawn into the band of morose misfits including Mo (Maureen) Tucker who built her own drum set out of tambourines and garbage can lids. With Reed’s droned vocals about angst-filled street life, Cale’s dissonant keyboard or strident electric viola and Tucker’s incessant drum beats they combined bizarre theatrical elements to produce the artistic essence of the beauty of ugliness.

The group would have been a footnote in New York City cultural history were they not discovered by pop artist Andy Warhol. Under Warhol’s tutelage, and significant financial support, the group, by then called The Velvet Underground, began performing at underground cafes and Warhol’s film series throughout the city. Combining them with mixed media and pseudo-sadistic theatricality, Warhol began booking them as his “Exploding Plastic Inevitable” show. The show, which celebrated sexual deviancy, violence and drug addiction, received widespread rejection by the art critics and shock and astonishment by those brave enough to be in the audience.

Only the first album by the Velvets, released in 1967 with its infamous Warhol designed peel-able banana, received any critical attention. Shortly following the release, the group had a falling out with Warhol and continual tension between Reed and Cale, the two creative forces, caused the Velvets to fade from public awareness.

While the Velvets never achieved any chart or commercial success, their importance should be viewed in the impact they had on the landscape of rock ‘n’ roll music. In the wake of the Velvets came the shock rock movement forged by David Bowie and Iggy Pop, and the punk movement led by Patti Smith, the Ramones and the British band, The Sex Pistols.

Through constant spats, Cale, Reed and the Velvets have continued a light switch existence. In spite of the constant reunions and divisions and lack of chart recognition, the band was inducted into the Rock ‘n’ Roll Hall of Fame in 1996, not for the number of gold records sold, no doubt, but for their vision of where rock, the rebel, could go.

The most immediate impact of the Velvet Underground was on a UCLA film student and poet named Jim Morrison. Together with Ray Manzerak, a fellow film student, Robby Krieger and John Densmore they formed The Doors, a name Morrison borrowed from Huxley’s book on mescaline, The Doors of Perception.

The Doors, with Morrison as lyricist and lead singer, were able to create moments of intense musical drama onstage. The sexually charged lyrics delivered by Morrison backed by the simple drumbeats, jazzy guitar and brooding electronic organ made for an eerie, mystical musical experience.

In 1966 the Doors were fired from playing as the house band at LA’s Whisky A-Go-Go for performing the explicit and Oedipal “The End”. A year later their debut record contained the Doors classics “Break On Through” and “Light My Fire,” finishing with an uncensored version of “The End”.

For the next five years Morrison and the Doors would achieve what the Velvets never could: chart success and critical recognition. Singles “Light My Fire,” “Waiting for the Sun” and “Touch Me” all reached the top three slots on the charts, gaining frequent airplay on AM radio while other songs, such as “The End” were part of progressive FM song lists.

The band also experienced a growing fan base, due in part to their radio exposure, but also due to Morrison’s bizarre onstage personality dubbed “The Lizard King”. Taking a cue from the Theater of the Absurd, Morrison attempted to shock the audience out of their complacency, thereby opening for them new doors of experience and enlightenment. His onstage antics frequently included obscenity and lewd gestures. In contrast with the activities of other contemporary rock bands like the Beatles or even the Rolling Stones, the Doors concerts mixed moments of intense musical drama with audience confrontation and provocation. Morrison, attempting to agitate the fan out of their apathy, took the performance into the audience, thereby being among the first to break the “fourth wall” that separated performer from listener.

His activities onstage, though at times successful, gained significant notoriety. Various arrests in ’67 and ’68 for public obscenity and disorderly conduct were minor compared to the arrest in Miami in March 1969. Charges for “lewd and lascivious behavior by exposing his private parts and by simulating masturbation and oral copulation” onstage kept Morrison in Miami for most of the year. When neither photos nor eyewitnesses could be produced in court to support the charges, they were dropped. But the damage to Morrison and the Doors’ careers was permanent. Though he abandoned his leather pants and Lizard King alter ego, few concert promoters wanted to risk the possible legal ramifications of such previous public conduct.

The next two years for Morrison consisted of elaborately produced (but poorly received) albums, a published book of poetry and increasing seclusion from fans. He died of heart failure in Paris in 1971.

The Doors, “Light My Fire”

The years since 1980 have brought a more tolerant light to the Morrison legacy. A biography, No One Here Gets Out Alive and surging record sales in 1980 caused Rolling Stone magazine to feature him on the cover with the title “He’s Hot, He’s Sexy, He’s Dead”. In 1983 MTV began playing Doors videos and a 1991 Oliver Stone biopic starring Val Kilmer received critical and commercial success.  The Doors were inducted into the Rock ‘n’ Roll Hall of Fame in 1993 with Pearl Jam’s Eddie Vedder filling in for Morrison in the band’s ceremonial performance.

Though never warmly welcomed into the mainstream of American pop consciousness, the Doors and the Velvet Underground prepared the music industry for the outrageous and bizarre world of glam rock in the 70s, the pile driving provocation of punk rock in the ‘80s and, eventually, the edgy, nihilistic sounds of Seattle grunge rock in the ‘90s.