Any understanding of the place and importance of rock ‘n’ roll in American culture, or for that matter, the place it has had on much of the world’s culture in the last fifty years, must begin with an acknowledgement of several key premises.

First, although several key moments in the timeline of rock history have occurred, such as Woodstock (the ’69 original), the first Beatles appearance on the Ed Sullivan television show, or the first broadcast of MTV, the various styles of rock over the years cannot be neatly packaged into compartments of decades. The need for record companies to label any offering as “Greatest Rock Hits of the Eighties” or “Rockin’ Classics of the 1960s” is, more often than not, a gimmick to simplify the flow of musical activity and discovery into marketable titles. This simplistic line of thinking might lead one to believe that on January 1, 1970, every rock band in the world woke up to a newly issued set of criteria and guidelines which needed to be followed as rock ‘n’ roll moved from the “Psychedelic Sixties” into the “Sizzlin’ Seventies”.

Although styles did evolve, they rarely conformed to the limitations of a calendar. Given that styles frequently overlapped the calendar, either anticipating or lingering beyond the confines of a decade, it should also be admitted that it is much easier to examine the history of rock ‘n’ roll when loosely broken down by the dotted lines of decades. If the caveat that musical styles transcend strict timelines is accepted, then the following study of rock ‘n’ roll history is easier examined by the somewhat artificial boundaries of time.

Second, rock ‘n’ roll was the inevitable product of two cultural phenomena: 1) the emergence of the demographic group called the “teenager” and 2) the cross-pollinating of black and white American cultures.

Prior to the early 1950s, the concept of a separate subgroup between child and adult was non-existent. When a child reached their late teens, they were married, engaged to be married, or at least thinking of marriage; they began to seek a career that would allow them to step out into life on their own, following the pattern established by their parents, grandparents, and generations before them. In their clothes, their hairstyles, the food they ate, the music to which they listened, or the entertainment enjoyed, they were becoming a replication of their parents. The concept of a separate time period between childhood and adulthood was completely foreign to American society.

Perhaps due to the loss of innocence in those first years following World War II or perhaps due to the booming post-war economy, which gave high school students discretionary income from after-school and weekend jobs, young adults began a cultural revolution of independence from the oppressive cultural rules of their parents. New clothes, new hairstyles, new food, new language, and new art and music were all part of the war of independence. Old was out, new was in; parents were out, teenagers were in.

Aided by the movie, magazine, radio and recorded music industries, which were all eager to fuel the independent movement, the emerging teenager in the early years of the 1950s was searching for a new musical language. It is the same search that has been at the core of each new musical wave: shaking the bonds of the past; embracing the freedom of the new. The teenagers of the late 1940s and early 1950s found it in the race music being played on small independent radio stations of America. The race music, as any African-American music was loosely called in the time period before the mid‘50s, consisted of jump blues and later, rhythm and blues (also called R&B). The wild driving beat, the racy lyrics, the raucous performances of singers and musicians would have never been part of mother and father’s listening selections – which only meant it was perfect for inclusion into the new musical language of 1950s teenager. The carefully chiseled line between the white and black cultures was being challenged, and not without significant resistance.

Early opponents of the new sound labeled it as “animalistic,” “primitive,” and even, “satanic,” just as they had labeled jazz in the 1920s. Particularly in the states of the Deep South, piously angered conservative white parents were vehement in their resistance. In the growing furor of 1950s and 1960s civil rights unrest, rock ‘n ‘ roll was an important artistic battleground against segregation.

A third important element which set the stage for the popularity of rock ‘n’ roll in the 1950s was the arrival of the 45 r.p.m. record. 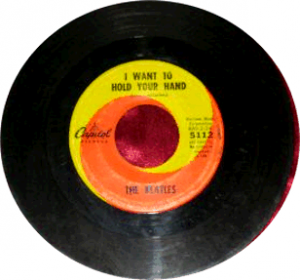 Since 45s were smaller and more compact than the large 78 r.p.m. records of their parents, they were more easily played on compact record players. These record players, unlike the high-fidelity record players of their parents, were small enough to fill a bedroom with sound, cheap enough to be able to afford with after-school job money, and portable enough to transport to a party. A 45 record held two songs: an “A side,” which was the singer’s more popular song, and a “B side” which, more often than not, was a song of secondary interest. Like the honky-tonk song in the country bars, early rhythm & blues and rock ‘n’ roll songs gained popularity through the jukebox. For the teenage market, meeting friends after school or on weekends at the local diner or drive-in and playing 45s on the jukebox was a regular part of the teenage lifestyle.

As important as the inexpensive record for disseminating the new sound was the emergence of independent radio stations eager to plug into the new market. Whether from a portable radio in their bedrooms or on the radio of dad’s car while out on a date, many teenagers heard the new sounds first from radio stations like WXEL in Cleveland, WLAC in Memphis, and KFVD in Los Angeles.

Together, the 45 rpm record, the radio, the juke-box, and the movie industry gave race music from the black culture a wide exposure into the emerging white teenage market. By the early 1950s, the external elements were in place for the revolution of independence to occur.