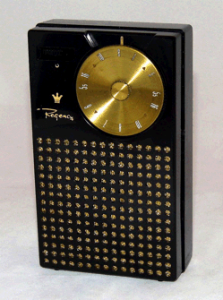 Whereas the invention of the microphone in the 1920s revolutionized recording technology, three technological developments in the late 1940s continued the modernization. The perfection of magnetic tape as a recording medium replaced the “direct-to-disk” process and allowed for multiple takes and eventually multi-tracking in the studio. The concept of magnetic recording dated back to the late 1800s, but was perfected by Hitler’s Nazi scientists in WWII. The technique was made commercially useful in the United States in the late ‘40s by Minnesota Mining and Manufacturing, otherwise known as 3M.

In 1948, the development of the transistor opened the door for miniaturization of many electronic devices, particularly the radio. By the mid-1950s, most teenagers could afford a small transistor radio, from which they could hear their local deejay spin their favorite rock ‘n’ roll songs.

The same year as the development of the transistor, scientists working for CBS, a dominant part of American entertainment, overseeing a nationwide radio broadcast system, a major recording label (Columbia) and a fledgling television company, developed a replacement for the 78 r.p.m. (revolutions per minute) record. The new 33 and 1/3 r.p.m. record had 300 grooves per inch instead of the 85 on an old 78, thereby expanding the recording time from under 10 minutes to well over 25. The LP or long play record was born and for the first time providing multiple songs to each side of a record. In addition to the added length, the technology also significantly increased the quality of the final product. The high-fidelity LP was the new standard for album production in the recording industry.

Not to be outdone by its competitor, RCA, one of the other giants in the entertainment industry, developed a smaller, more portable record that attained the same musical quality as the LP but with only one song per side. RCA’s 45 rpm became the new standard for the release of singles and replaced old 78s in jukeboxes across the country. This smaller, more durable record was cheaper to produce thereby allowing record companies to sell them less expensively and still maintain a respectable profit margin. Like the inexpensive transistor radio, the inexpensive 45 single and its portable record player put new music into the hands of millions of teens.

The growth of the independent radio station created further upheaval in the broadcasting industry. Prior to 1948, most of the radio stations in America were members of one of four major national broadcast networks. The vast majority of their programming hours were determined, prepared, recorded and dispersed from a corporate headquarters in New York or Los Angeles. In the early 1950s, entrepreneurs, wishing to carve their own independent path, bought broadcast licenses and built stations that were designed to appeal to a more select demographic group. Instead of ‘broadcasting’ a series of homogenized programs, hoping to appeal to everyone across the country, they chose their target audience carefully and selected music and programming to suit. Upstart radio stations in Cleveland and Cincinnati, Los Angeles and San Francisco, Houston and St. Louis began playing rhythm and blues records from independent labels. At first, the music appeared only after midnight; then after 9 p.m., soon rhythm and blues music programs were appearing during the daytime on weekends and eventually, at any time during the day.

By the late ‘50s, the major radio and record corporations were starting to become concerned. Independent labels like Chess, Atlantic, Sun, King and Savoy were gaining a ever-increasing share of the market through their releases by Presley, Chuck Berry, Ray Charles, Roy Orbison, Fats Domino and dozens more. Independent record labels were gaining airtime on the local radio stations by “tipping” the local deejay a few dollars to get extra radio play. Companies like Columbia and RCA, who had at first shunned the new artists, were feeling the financial pinch.