Years before the Original Dixieland Jass Band claimed to have created jazz, key musical figures in New Orleans began to make a name for themselves. These players possessed the energy to blast the sound out of New Orleans, the charisma needed to earn it an audience, the artistic skill to give the music direction, and the virtuosity to separate it from anything else being played in the entire world.

Of mythical reputation is perhaps the first known jazz musician, a cornet player by the name of Buddy Bolden. Very little is known of his sound except that it was apparently louder than anyone else blowing horn at that time. One story says that he would blow so hard that he actually blew parts of the instrument right off the horn. According to other witnesses, he and his band rarely gave concern for intonation, at times playing entire concerts without attempting to tune with one another. Yet his enthusiasm as a performer, his innovative ideas on melodic embellishment, and the sheer volume of his sound made up for the apparent inaccuracy of pitch.

Unfortunately, Bolden was an alcoholic and a womanizer, characteristics which made him unreliable at concerts and unpopular with his wife. In 1907, perhaps in an unfortunate merging of his two vices, he smashed a water pitcher over the head of his mother-in-law. He was sentenced to Louisiana’s state asylum for the insane, where he remained until his death in 1931. As a result, no recordings were ever made of Bolden’s playing, and we know his skill only from faded accounts from musicians who admired him.

As jazz migrated away from the brothels of New Orleans, trumpet players like Freddie Keppard and Joe “King” Oliver became known respectively in New York City’s Harlem and Chicago’s South Side jazz scenes. Pianist “Jelly Roll” Morton and his Red Hot Peppers left New Orleans to perform jazz in Los Angeles and then back to Chicago and New York.

Morton, who also claimed to have “invented” jazz, was significant for his contribution as a jazz composer. Prior to Morton, the emphasis was placed so strongly on collective improvisation that the harmonic structure of jazz was deteriorating into stale repetitions and rehashing of existing songs.

Morton was the first significant composer of jazz in the modern (post 1917) era. He was able to balance the excitement of solo improvisations with a more organized and interesting harmonic and rhythmic composition. In this sense, he provided the connection between the formally composed ragtime music of Joplin and the spontaneous musical ideas of the street and brothel jazz musicians. As a pianist, he was without peer, sometimes playing two or three melodies simultaneously on the piano as well as adding harmonies around the separate melodic ideas. Though a part of the early wave of jazz, his ideas were a decade ahead of their time. Not until the appearance of Duke Ellington in the late ’30’s were his compositional techniques more fully realized. 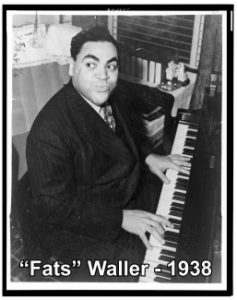 Other pianists of the era pioneered their own paths in the new style. James P. Johnson, a New Jersey born pianist, expanded ragtime to a style of piano playing called “stride piano”, where the distance of the left hand shift between bass notes and chords (oom-chik, oom-chik) was stretched further apart (hence the term “stride”), while at the same time, the tempo was increased to a frantic pace.

In the ’20s and ’30s, pianist “Fats” Waller shaped a less aggressive style of jazz stride piano, merged it with elements of pop songs, and performed it in a relaxed, congenial manner that would set the stage for piano players in the swing era. Unlike some of the jazz coming out of New Orleans and Chicago, Waller’s songs had lyrics which were almost always sung. The lyrics were often romantic in nature such as his standard songs “Ain’t Misbehavin’” and “Honeysuckle Rose,” but they were just as frequently comic novelty songs like “All That Meat And No Potatoes” or his ode to marijuana, “The Wail of the Reefer Man.”

Like George Gershwin, who approached jazz from the pop side of American music in the 1920s, Waller blurred the line between jazz and pop music. From the mid ’20s to the late ’30s, Waller was regularly making records and appearing on the radio. His compositions sold millions of records, hit the number one position on the sales charts six times, and were even incorporated into several Broadway shows. No jazz musician of the early era achieved the widespread popularity of Fats Waller. More importantly, pianists for the next thirty years would be influenced by his ideas.