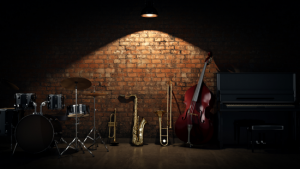 Technically, jazz could be performed with a kazoo, a harpsichord, and a tuba. Practically speaking, the type of instrument involved in playing jazz is not only an important element in the final product, but it is also one of the clues as to what time period and genre of jazz is being performed. A synopsis of the evolution of jazz instrumentation is helpful in understanding its history.

Originally, the instruments of pre-jazz were “found” or home-made. Percussive instruments like a gourd with dried peas inside kept the rhythmic pulse, while a hand-crafted stringed instrument like a banjo provided chords or plucked a melody. As the 20th century approached, trumpets, cornets, clarinets, and trombones were added to the mix. From the formally composed side of the pre-jazz family, ragtime introduced the piano to early jazz efforts.

By the mid-1920s, when jazz moved out of its adolescent stage, jazz instrumentation had finished evolving from a ragtag group of pickup instruments to a standard set of sounds. The melody was most often provided by the trumpet, clarinet, or trombone, with the saxophone being added by the early ’30s. Although they could also provide melodic ideas to the mix, the banjo, guitar, and piano were most often relegated to harmonic support of the melody. The bass line was initially assigned to the tuba, but by the early ’30s, the standup string bass had assumed the role as harmonic foundation. Early on, in the pre-jazz and early jazz eras, the drum set was extremely basic: a snare, a bass drum, and a couple of cymbals. By the late 30s, the drummer had a setup twice that size, with one snare, one or two tom-toms, one or even two bass drums, and at least three or four cymbals — ride, crash, and hi-hat.

With the growth of the jazz ensemble in the big band era of the 1940s, written arrangements became the necessary norm for the group. Composers and arrangers crafted song charts that were rhythmically and harmonically more complex than anything previously heard in popular music. Sections of trumpets, trombones, and saxophones flowed through musical lines as if they were one voice. Featured soloists were given opportunities to improvise, but the majority of the instruments were limited to playing the chart as written by the band’s arranger.

As jazz moved from its pinnacle of mainstream popularity in the big band era into much more intellectual and experimental phases, the size of the ensemble once again was diminished. Gone were the sections of 4 trumpets, 4 trombones, and 5 sax players. Scaling down to just a 3 piece rhythm section (piano, bass, and drums), a trumpet or sax soloist had enough of a foundation without being encumbered by the complexity and rigidity of written arran 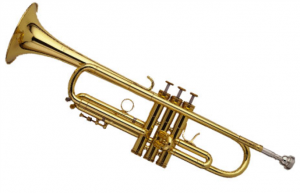 gements. The days of artistic freedom for the individual had returned.

The cool era of the ’50s and early ’60s brought a new type of instrumentation: jazz instrumentalists with quasi-orchestral backing. Ellington, Brubeck and others wrote extended musical works that had the spirit, if not the structure of traditional jazz. Choral masses, concertos, symphonies, and film scores all conveyed the essence of jazz with new sounds: choirs, strings, French horns, flutes, cellos, and oboes among others. On several occasions, Miles Davis was backed by an orchestral brass and woodwinds being directed by a conductor. Jazz had reached a level of legitimacy on par with classical music and for some, the line separating the two styles was completely blurred.

Meanwhile, free jazz, which was predicated on the concept of the absence of musical rules, at times pared back to the bare essentials of instrumentation: drums, bass and instrumental soloist. According to individuals such as Ornette Coleman and John Coltrane, the minimal instrumentation allowed for maximum improvisational freedom and individual expression.

By the mid-1960s a new generation of teenagers considered jazz in the traditional sense to be boring. Big band was considered the “old music” of their parents – cool was boring and free jazz just too bizarre. In an effort to find a new jazz language contemporary enough to appeal to those who regularly listened to Hendrix and Led Zeppelin, Miles Davis electrified his horn, sending it through fuzz and distortion pedals; he backed the new sound up with a combination of jazz (trumpet, sax, and drums) and rock instruments (electric and bass guitars, electric pianos, and Latin percussion instruments) and gave birth to a style known as jazz-rock “fusion.”

In the ’70s fusion pioneers like Chick Corea and Herbie Hancock were introducing synthesizers to fusion. The synthesizer, which expanded the types of sounds available to the typical jazz ensemble, was the starting point for a whole new wave of jazz in the 1980s called “smooth jazz.” By the 1990s, the relaxing sounds of smooth jazz sax players like Kenny G had found a prominent place on the adult contemporary charts.

At about the same time, a swing back to a more acoustic and traditional sound was being developed by those mixing classical, pop, and jazz elements together. With an emphasis on synthesizers, acoustic piano, jazz guitar, and the sounds of nature, George Winston and others crafted what was to become known as “new age” jazz. In the next two decades, composers like Enya moved a synthesized style of new age jazz from the edges of popularity to the middle of the mainstream. The emphasis in her style of new age jazz is on synthesizers, world instruments, and vocal pads – a new age equivalent to the harmonic fog of the Nashville string sound, de-emphasizing the actual lyrics to the point of just being little more than ephemeral passing clouds of vowels.

By the beginning of the 21st century, Enya’s music was not only appearing on the radio, but was also featured in mega-movies such as Lord of the Rings, even garnering Academy Award nominations. This meditative, quasi-spiritual type of new age jazz was a staple soundtrack in yoga classes and chiropractic offices. Although it was almost the antithesis of the swing era of the 1940s, the popularity of new age music provided its artists with a star status unknown in jazz since Benny Goodman and Duke Ellington.