Meanwhile, Gottschalk’s music gave exposure to the sounds of New Orleans throughout the world and helped to influence a style of piano music evolving in the 1890’s which incorporated the structure of Sousa’s marches with the energetic syncopation of Gottschalk’s music. It was born in the parlors of middle-class blacks and in the backrooms of the brothels in New Orleans. It was called ragtime.

Gottschalk’s piano pieces presented the rhythms of Congo Square in an organized yet syncopated manner. Ragtime took these ideas and standardized them. It has been said that ragtime is “white music played black” and in its structure and common characteristics, this may be true.

Ragtime, as we have seen, is composed (rather than improvised) piano music. It combines a steady, even left-hand chording with a syncopated (“ragged”) right hand melody. Structurally, the ragtime piano piece followed the march, with a series of “strains”, or 8 or 16 measure musical phrases presented with repetition (AABBCC…).

Unlike previous music being created by black Americans, which was spontaneous performances, ragtime was composed music put into written form and disseminated to the mass public. Composers like Scott Joplin aspired to make ragtime an Afro-American classical music.

While ragtime was an important step in the path towards the development of jazz, it was not lasting in its popularity. Its downfall might lie in the fact that although it was highly energetic and artistically composed, only a few of the middle class could perform it. Most relied on their pianolas or player pianos with music rolls to hear other performers play the pieces.

However, the second reason for the disappearance of ragtime might be due to its association with the brothels and bordellos of New Orleans, most of which were located in a district known as “Storyville.”

At the end of the 19th century, as bordellos were spreading throughout New Orleans, morally conservative city councilman Sidney Story 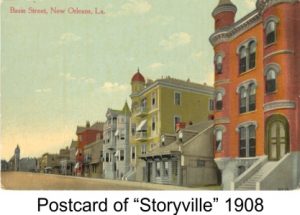 proposed that all the houses of ill-repute be geographically located in a centralized district to protect the upstanding citizens of the city. Those who were forced to uproot and move their businesses to this new area gained a measure of revenge when they nicknamed it “Storyville.” The district was so widely known and so organized that it even had its own consumer guide, “The Blue Book”, which listed every working woman in the district and where they might be found.

The opportunities for employment for musicians in Storyville were numerous, particularly for piano players who could play this new, hot music called ragtime. Not only did ragtime provide an energetic, exciting entertainment for the guests in the parlor by the front door, but when played loud, it could cover up the noises that were going on upstairs. Although a few brothels added other instruments such as guitar, banjo, trumpet or clarinet, it was built around the sounds of the ragtime piano. While the nightclubs and cabarets in Storyville hired many instrumentalists, a good piano player in Storyville was never without work and never went hungry.

Joplin had never intended for his compositions to be the musical background for such sexual activity. But, as the public began to associate ragtime piano with such things, it was rejected by upstanding, respectable Americans. In a way, ragtime was the precursor of rock ‘n roll in that it was rhythmically innovative, originally connected with sex, first accepted as novel and then rejected by the morally conservative mainstream.