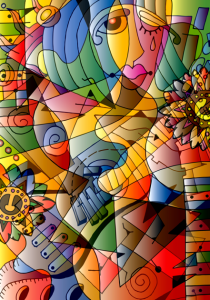 In performing music, it is essential that each member of the ensemble allow their inner metronome or “pulse-meter” to become synchronized with all others performing at the same time.

In its most perfect state, this synchronization forms a rhythmic “groove” which is both consistent and pulsatingly predictable. This is the element that causes the toes or fingers to tap or the body to move on the dance floor.  If the improvised solo causes mind and emotion to connect with the music, the rhythmic groove is that which brings the body into the musical experience.

A performance of a classical symphony rarely creates a groove with the rhythm. The conductor is allowed to take great freedoms in the rhythmic consistencies. A phrase may push ahead or pull back dramatically in just a few measures. While its beauty lies in the artistry of the performers and the ethereal musicality of the waves of sound, and the mind and emotions may be moved, the body doesn’t always connect and want to get up and dance.

A Strauss waltz or Sousa march, on the other hand, both create rhythmic grooves which will generate a bodily response provided the listener isn’t musically bigoted against such musical antiquities.

A groove in jazz, however, is only one of three rhythmic parts which cause the music to “swing.” The two others are syncopation and the use of swing-eighths.

Syncopation is to the groove what the improvised solo is to the structured chord changes. It is the freedom to play “against” the pulsing rhythm and not always “with” it. Syncopation is either a delay or an anticipation of the stressed rhythmic pulse. Most often it is the melody delaying or anticipating the beat in the groove. On occasion, whole sections of instruments or the entire ensemble might break from the groove together creating a planned syncopated punch to a series of chords before falling once more into rhythmic pulses.

If the rhythm being played by the piano, drums, and bass (known as the rhythm section) is erratic or imprecise, no groove is established and the power and excitement of a syncopated melody is significantly weakened. However, with an established rhythmic pulse, the syncopated melody has the freedom to bob and weave in the same way a kite floats back and forth in the wind while still being connected by a string to a secure object on the ground.

In addition to the groove and syncopation, the swing of jazz is built upon what is known as “swing-eighths.”

In its purest sense, music is very mathematical. The relationship of notes in scales and chords are built upon mathematical concepts. Pythagoras, one of the earliest mathematicians (5th century B.C.) is known not only for that “right-angle triangle/square of the hypotenuse” theory, but also for developing some of the first theories about harmonies and intervals. Even as late as 1746, William Tans’ur, writing in his book, A New Musical Grammar described a “Master of Musick” as one who

“must not only be a grammarian, but also a Master of Letters and Languages, in order to unfold what is    locked up in the Closets of the Learned – He must be an Arithmetitian [sic] and able to explain Numbers, and even the Misteries [sic] of Algebra; and also a Geometrician, to evince a great variety, the Original of Intervals, Consonant and Dissonant…” (Tans’ur, 1746, p. 9.)

In strict rhythms, then, a quarter note, when divided in half, is given two equal eighth notes. These “equal eighths” are the pattern followed in most classical and folk music. While occasional triplet eighths can be found, these are the exception to the rule.

In jazz, however, the unequal 2/3:1/3 ratio became a standard part of the musical language within the first two decades of the century.

Although the ratio was theoretically 2:1, in actual practice, the swing eighth was never that exact. If any given solo containing swing eighths were measured, the ratios might be anywhere from 60:40 to 70:30. In that sense, swing eighths were not an exact formula so much as a rhythmic window which allowed the jazz musicians to adjust the note values according to the “feel” of the music.

From the early 1920s, uneven or swing eighths combined with syncopation and set against a steady groove beat formed the rhythmic foundation of jazz.