At the heart of jazz is the practice of spontaneous melodic creativity known as improvisation. It is the musical version of making up a story as you go along, or speaking conversationally with friends. In these two activities, there is freedom to say what comes to your mind, but the limitations of language, grammar, and propriety form the boundaries for each conversation. The most profound or passionate statements would be a waste of time if the speaker chose to scream it at the top of his or her lungs in a mangled, disjointed ancient or foreign language. 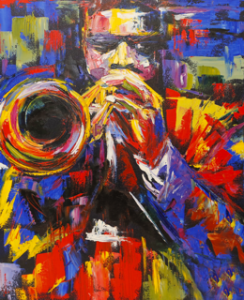 So too, the jazz improviser has both freedom and boundaries to his musical expressions. Although it may sound at times as if there is no structure or logic involved in the solo, the opposite is actually true. The limitations of chords and rhythms form boundaries for the improvised melody.

Generally speaking, an improvised solo, whether by instrumentalist or singer, draws from the musical notes that become “available” based on the harmony being played by the other instruments at the time. As the chords change, the collection of acceptable notes also changes. The choice of notes is then packaged together with certain rhythms into “musical phrases” of either consistent or erratic lengths.

One song, with 32 measures of chord changes, can have literally millions of possible improvisational melodies attached to it. The success or failure of an improvised solo lies in its ability to be artistically creative, emotionally inspiring, and still be musically “correct.”

After an initial presentation of the chords and melody in their intact “composed” manner, the soloist improvises a new musical idea based on the identical series of chords being repeated by the other instruments. Each additional verse consists of the predictable (chord changes) and the spontaneous (improvised solos).

In some jazz styles, one single soloist might have several verses to present improvised musical thoughts, each one different and unique, yet fitting the same harmonies played each time. Other jazz styles allow for several soloists, each taking their turn at a phrase or verse of the song.

The boundaries placed on the practice of improvisation have changed with each new wave of harmonic experimentation. And yet, the concept of a soloist combining artistic virtuosity with emotional expression in a spur-of-the-moment musical statement has always been at the heart of jazz.

In an almost Zen-like manner, the jazz soloist allows the yin and yang parts of himself – that is, the technical and artistic sides – to meld together as a source bank for his “on the fly” musical creation. As he is focused on the chord changes and the available notes and rhythms at his disposal, he pours out a musical line which may soar and swoop, stagger and stutter. It may pull painfully, or linger hesitantly on a single note. It may explode into a pyrotechnic display of consonance and dissonance that alternatively comforts and jars the listener.

Like an acrobat on the high wire, the improvising soloist constantly flirts with disaster. A missed chord change, a poorly chosen set of notes, a melodic idea that resolves awkwardly, or a moment’s hesitation that gets the soloist rhythmically out of sync with the other musicians, can reveal his lack of “jazz chops.”

In its most perfect presentation, an improvised solo is the jazz musician’s highest skill level and most intimate feelings merging into one never-to-be-repeated aural offering.  Like a rainbow, a sunset, or a bolt of lighting, this fleeting beautiful or powerful presence is here, then gone. Just as a photograph of a rainbow or a recording of thunderclaps can only capture the essence of the moment, a recording of an improvised solo can only capture the remembrance of an improvised performance.

The moments of true aural ecstasy for a listener are experienced only in a live performance. For it is there that the soloist does his or her work as musical technician and artistic performer.

Like the circus performer, seeming to defy gravity, the fearless jazz improviser knows his limits and yet never flinches from pushing them. In a split second, the melodic idea goes from brain wave to sound wave in an almost seamless flow of instinctive musicianship. While the muses dance their hardest below, the jazz soloist improvises his way across a musical line that separates common man from the musical demigods. And all without a net.