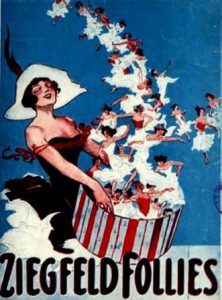 Appearing in the final years of the 19th century was a musical stage form that would heavily influence theatre, film, radio, and television throughout the 20th century. Similar to burlesque and vaudeville, the revue was borrowed from the French form of the same name, but was shaped to become uniquely American.

Like burlesque, vaudeville and the minstrel shows, the revue contained a series of musical numbers, comedic sketches, and specialty routines. The difference between revue and the other forms lay in the unifying element of the revue. It could be unified on an idea or theme (a revue on love or union solidarity), it could be unified around an organization (a hospital auxiliary fundraising revue), or an individual (such as a Cole Porter revue or one of the many Ziegfeld Follies revues). The interrelation of purpose and theme connects what would have been a series of independent acts in vaudeville or burlesque. The careful planning and design of the show led to a more cohesive unit, similar to later “book” musicals. The revue also differed from vaudeville in that the same group of performers appeared throughout the show. In vaudeville once their act was finished, the performers wouldn’t reappear onstage until the next performance.

Influenced by other dominant musical theatre forms of the day, revues at first were large, impressive visual feasts. Before the 1930s most revues fit the “spectacular” mode, complete with elaborate scenery, lavish costumes and technical wizardry similar to the extravaganza or spectacular shows of the late 19th century. After the 1930s a second, more intimate style of revue was being crafted. Less dependent on the sumptuous accoutrements and more on the charismatic personalities and moments, the intimate revue featured a smaller cast, but was built around intellect, wit and charm.

The first truly American revue was The Passing Show, launched in 1894 by George Lederer. Over the next decade various theatres and producers explored variations without any significant success. However, the first great spectacular revue was the Ziegfeld Follies of 1907, where Florenz Ziegfeld brought beautiful sets, costumes, girls and music together. So successful was the Follies that Ziegfeld began a series of annual Ziegfeld Follies of … which ran from 1907 until 1931. Other spectacular revues were staged during the ‘10s and ‘20s such as the George White Scandals, which had twelve different from 1919 to 1939. Like the Follies, the Scandals revues featured a beautiful and elaborately costumed girls chorus. The sight of the luxuriously dressed dancers moving in synchronization on the stage was eventually brought to Hollywood, where elements of the Follies and Scandals were filmed for wider distribution in the 1940s.

Bert Williams, a well-known African-American comedian and singer from vaudeville and burlesque, broke the color barrier by being the first African-American to be signed to feature in a Broadway revue show in 1910.

While the spectacular revue dominated for the first two decades of the century, beginning in the late 1920s a more intimate, personality related type of revue was gaining popularity. The “Golden Age” of revues from 1929 to the late 1940s and included The Little Show (1929), Three’s a Crowd (1930), Life Begins at 8:40(1934) and Pins and Needles (1937). What the intimate revue lacked in opulence and magnificence it made up for with charm, energy, passion, and an off-handed, almost casual tone.

While songwriters like Irving Berlin, Victor Herbert, George Gershwin, and Jerome Kern were writing songs for the large spectacular revues in the ‘20s, the intimate revues of the ‘30s were built around the musical talents of composers like Noel Coward and Richard Rodgers.

Just as movies brought an end to vaudeville in the late 1920s, television contributed to the end of revues in the late 1940s by creating variety shows that emulated the revue shows of the ‘20s and ‘30s. When vaudeville became popular many burlesque stars were hired to headline the variety playbill, but movies hired many to leave the theatre for Hollywood. When television became the new medium for entertainment in America many of the earliest stars had gained their first professional gigs in revue shows. Television pioneers like Imogene Coca and Sid Caesar went from intimate revue with songs and sketches to the innovative Your Show of Shows a ground-breaking television show comprised of sketches and songs.

From the early ‘40s until the late ‘60s revues were rarely produced in major theatres but found venues in small, off-off-Broadway theatres disguised as cabaret shows.

A renaissance of revues began in the early ‘70s when composer-centered revue shows made a comeback on Broadway. Shows like Ain’t Misbehavin’ (1977 revue of Fats Waller’s music), Sophisticated Ladies (1981 – music of Duke Ellington), and Smokey Joe’s Café (1995 – music of Lieber and Stoller) not only caught the public’s attention but played to hundreds of sold-out houses and won several Tony awards (American Musical Theatre’s counterpart to the movie industry’s Oscar). Also called compilation or catalog shows, the contemporary revue format is still being explored with the works of Billy Joel (Movin’ Out), Green Day (American Idiot) and The Million Dollar Quartet, a revue based on the historic meeting one afternoon when Elvis Presley, Carl Perkins, Johnny Cash and Jerry Lee Lewis got together at Sun Studios in Memphis, Tennessee.

The importance of the two types of revues presented at the beginning of the 20th century was that they prepared American musical theatre to move into the modern era. While the extravaganzas and spectaculars of the 1880s were gargantuan in size and overwhelming in numbers, the spectacular revues of Ziegfeld and George White emphasized beauty and elegance over quantity. The humor and songs of burlesque and vaudeville relied on broad humor, slapstick physicality, low-brow sight gags and buffoonish costumes. The intimate revues of the ‘30s were witty, intelligent, and subtle; using character and situation driven comedy with scenarios and clothing more accessible to the average theatre-goer. As musical theatre began to explore the book-musical format, the music composed for the revue shows set a higher standard for creative teams of composers, lyricists, producers and performers. Prepared by the intimate revues of the ‘30s, audiences were accustomed to songs and lyrics with more subtlety, more intimacy, more reflection and inner revelation.

The loosely connected, intelligent, witty revue show still exists, not only on Broadway and in smaller regional and local community theatres, but especially on television, where shows like Saturday Night Live have continued the tradition of the witty, charming and sometimes irreverent.