Musical Theatre Ch. 08: Fresh Voices on the Stage in the 1960s
In Progress

The cultural revolution of the 1960s was, in some ways, a parallel of the 1920s. The urgency to find new forms, new voices and new sounds brought jazz and contemporary subjects to the 1920s; the same need brought new elements to the stage in the 1960s. 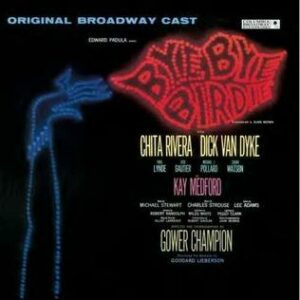 Inspired by the media circus leading up to Elvis Presley being drafted into the army in 1957, Charles Strouse and Lee Adams took the seeds of the “rock ‘n’ roll leaving his fans behind” story and created their first success: Bye, Bye, Birdie. The original production in 1957 ran over 600 performances on Broadway, and was one of the first American musicals to focus on the culture, language, music, and roller-coaster emotions of a new demographic: the teenager. In the next decade, the life of teenagers would be visited several more times, but perhaps the first “teen-musical” was Bye, Bye, Birdie.

Charles Strouse and Lee Adams’ 1964 musical Golden Boy featured African-American singer/actor/dancer Sammy Davis, Jr. as a young black man who breaks away from the inner city ghetto by becoming a professional boxer. In an era of civil unrest, this musical also included an interracial love between the young black boxer and his white girlfriend. In spite of the controversial moments, the show had 568 performances on Broadway, mostly on the popularity and talent of Davis.

A decade later, Strouse would have two more blockbusters on Broadway. His 1970 show Applause, which ran for nearly 900 performances, was one of the many musicals about the excitement and anxieties of theatre life. But Strouse’s most lasting and popular contribution to musical theatre took place in 1977 when he brought a classic comic strip to the stage. Annie, a musical based on the character of Little Orphan Annie in a story of optimism and decency in the middle of the Depression era despair and gloom. The hope and resilience of the show, infused with humor and songs celebrating that the “sun will come out tomorrow” struck a chord with American audiences, resulting in a run of over 2,300 performances. It has been estimated that between 700 and 900 theatre productions of “Annie” are produced throughout the world each year.