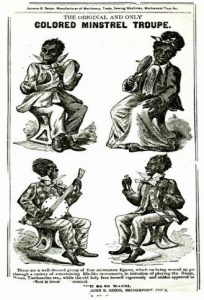 The songs, caricatures, skits and comic patter of the minstrel shows were an attempt to reflect a white society’s idealized and stereotypical view of the African-American life on the plantation in the South. Since most minstrel shows were created and performed in the urban centers of the North, perhaps the urge by white society to create a romanticized and sentimentalized version of reality was an attempt to create artistically an alternative world where African-American slaves were completely good-natured and light-hearted, living a happy and satisfying life on the plantation. A portrayal of the reality of the slave’s life, filled with cruelty, anxiety, danger, and death, would have been much too disconcerting to the audiences gathered for an evening at the theatre.

By the 1850s the minstrel show had grown to rival the melodrama as the most popular form of theatre entertainment. While some of the songs and dances were adapted from authentic African-American culture, the increasing demand for new and different music caused minstrel companies and theatres to become the first American stage form to commission music to be written specifically for its performances. Dan Emmitt’s “Dixie” and Stephen Foster’s “Camptown Races” and “Oh, Susanna!” are examples of composed songs patterned after the authentic sounds of African-American culture in the mid-18th century and used in minstrel shows. 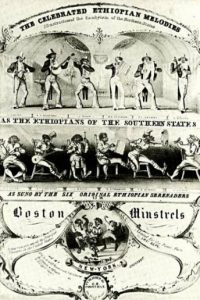 In addition to the songs and dances reflecting perceived African-American culture, the most significant characteristics of the minstrel shows centered on the presentation of stereotypical perceptions of “Negroes” as lazy, conniving, jesting, easy-going, and jocular – all done by white men in burnt cork blackface. As disturbing and offensive as this is today, the costumes, blackface, physical antics and stereotypes were as solidly accepted as the norm for minstrel shows in the antebellum period as the jewelry, clothing and gold teeth and posturing are in the hip-hop era of the late 20th and early 21st century.

Although some white actors in the 1820s were presenting exaggerated antics in blackface as skits in larger works, advertising themselves as “Ethiopian Delineators”, it wasn’t until Thomas Dartmouth Rice created the character “Jim Crow” in 1832 as an inter-act entertainment in dramatic and comic plays that the stereotypic character form for minstrel shows gained popularity. Rice’s blackface Jim Crow with his songs, dances and monologues were supposedly patterned after an elderly, crippled black stablehand Rice had watched while in Louisville, Kentucky. The shuffle dance, the contorted upper-body moves, the happy-go-lucky attitude and slurring dialect became common ingredients for many minstrel show characters. While the term “Jim Crow” is most often used in the past century to refer to laws and practices which discriminates against the African-American, in the 19th century it was perceived to be as innocuous and entertaining as the images of Mickey Mouse, Homer Simpson or Buzz Lightyear are today. 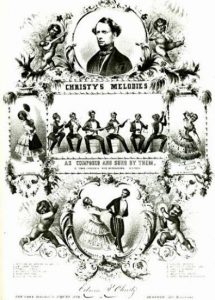 While the character of Jim Crow spawned numerous “Ethiopian Delineators” of similar ilk, it wasn’t until 1843 that four blackface actors, under the leadership of Dan Emmett banded together to create the Virginia Minstrels – “a novel, grotesque, original, and surprisingly melodious Ethiopean Band.” The term “minstrel” was borrowed from the highly successful traveling Tyrolese Minstrel Family which had just passed through the area. Although the Virginia Minstrels only lasted less than a year, within a short time many imitators of the minstrel show sprung up such as Bryant’s Minstrels and Leon’s Minstrels. A similar minstrel group called the Ethiopian Serenaders performed at the White House for then President Tyler and his guests.

Without much doubt, the most successful of the minstrel companies of the 19th century was Christy’s Minstrels which during one season earned almost $320,000 charging $0.25 per ticket. The Christy Minstrels traveled to England where their shows created a furor of excitement and several unauthorized imitation companies. At one point, four different Christy Minstrel companies were performing in London, each vowing that they were the original. Edwin Christy was also responsible for commissioning Foster and others to write songs for his shows, which he not only used in the minstrel performances but then sold afterwards to the public as printed sheet music – with his own name listed as song composer.