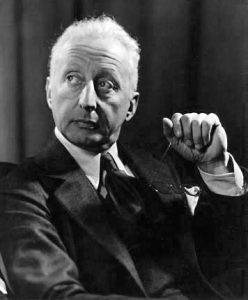 If elegant Herbert and contemporary Cohan found themselves on either end of the musical theatre spectrum in the 1910s, other talent would signal the arrival of a merging of the carefully crafted and the publicly accessible.

Jerome Kern was the first of a series of new, younger composers who combined the elegance of Herbert’s operetta with the broad appeal of Cohan’s musical comedies. Victor Herbert himself identified Kern as the one who “will one day inherit my own mantle.” Years later, in his autobiography, Richard Rodgers would say of his idol that

“it was the Kern (musical) score that captivated me and made me a Kern worshiper. The sound of a Jerome Kern tune was not ragtime; nor did it have any of the Middle European inflections of Victor Herbert. It was all his own – the first truly American theatre music – and it pointed the way I wanted to be led.”

Kern began his career as a song-plugger – playing popular sheet music songs on the piano in stores and store windows to encourage sales. Later he worked as a rehearsal accompanist for shows while trying to sell individual compositions to sheet music publishers and to theatre producers for their shows.

His first opportunity to write music for an entire show took place when he was part of a creative threesome who began a series of short-lived but tremendously significant works called the Princess Shows. Over a period of only four years, nine highly successful musical comedies were produced at the small Princess Theatre off-Broadway in New York. The team of Jerome Kern (composer), Guy Bolton (book) and (eventually) humorist P. G. Wodehouse (lyrics) created a series of important “integrated” shows, where all elements of music, plot and lyrics worked to advance comedic and dramatic moments, character development and emotional ebb-and-flow. Not a line, not a note, not a moment was considered superfluous and inconsequential to the outcome of the production. Although music, book and lyrics were capable of each standing on their own, the combination of three strong elements in a series of musical comedies was innovative. The concept of integration in the Princess Shows was not only limited to bringing music, script and lyrics into a harmonious relationship. The production staff and costumer paid particular attention to designing a set and creating costumes that meticulously reinforced each character and every situation.

After their initial openings in the small Princess Theatre, most of the Kern/Bolton/ Wodehouse shows either moved to larger venues or were taken on the road by one of the three road companies established to bring the Princess Shows to the rest of America. At one point in 1917, five different “Princess” musicals were playing at the same time in different New York theatres.

The Princess Shows were built on believable, modern stories, contemporary language, humor that grew from the moment and character, and music that was both intriguing and emotionally engaging.

By 1920, the status achieved by Kern had opened doors to create musicals away from the Princess, opportunities which yielded tremendous success. Sally (1920) and Sunny (1925) were both solid at the box-office, each running for over 500 performances. But these were merely fillers between the innovations of the Princess shows and the monumentally important musical, Show Boat.

Kern’s work on Sunny was with a young lyricist named Oscar Hammerstein II. Years before Hammerstein would team up with Richard Rodgers to create classics of musical theatre like Oklahoma, and South Pacific, the thirty-year-old lyricist and the forty-year-old composer discussed the possibility of doing an “adult” musical – that is, one that was not only topical, but didn’t shy away from the uncomfortably mature issues.

With a romantic, yet heart-rending story, colorful, believable characters, and genuinely “American” locales, the book was unlike anything attempted on the American musical stage up to that point. Never before had a musical theatre addressed the issues of unhappy marriages, infidelity, racial prejudice, interracial marriage, alcoholism, gambling addiction, intolerance and class discrimination. Rather than simplifying or omitting possibly offensive aspects, Kern and Hammerstein brought each of the flawed characters and moments of unease to the final production. Much to the surprise of the two, Florenz Ziegfeld, from the Follies fame agreed to produce the work. Kern’s final score included homages to operetta and minstrel music, but also to folk, blues and contemporary popular song. One of the most important songs in the show, “Ol’ Man River,” about the Mississippi River, on which much of the show is set, is used by Kern not only once by a main character, but then later in reprises as a melodic link, a motif, throughout the show. In an ingenious step, Kern chose to allow the music, like the river itself, to wind its way around characters and situations in the show.

Many who attended the premiere performance were shocked by what they saw. Expecting light musical comedy, as was the tradition in musical theatre, the audience was faced with dramatic situations never before addressed in musical theatre. The opulence of the sets (overseen by Ziegfeld), the intensity of the dramatic moments, the intelligent comedy, the richness and variety of the music, a cast of over one hundred, and superb performances by one of the most extraordinary casts assembled made Show Boat an instant success, running for 572 performances. For most in the audience, it was the first time that they had seen African-American performers present characters not parroting the happy-go-lucky icons of the minstrel show and burlesque. Some were even offended at the sight of white and black actors on stage at the same time. To these audience members, the emotional connection they felt with the black characters, who were expressing genuine, emotional pain and human ache, was a total surprise. The ‘slice of reality’ show had overnight made everything preceding it antiquated and outdated.

Within two years of the premiere a film version was made and within nine years it was revived on Broadway and a second film version made. In the eighty years since its 1927 opening, Show Boat has had five major revivals on Broadway and three motion pictures made in Hollywood. The most recent Broadway version, in 1994, ran for 946 performances, almost twice the number of the original. Many acclaim it to be the most significant musical masterpiece ever produced in America. Although both Kern and Hammerstein would go on to create many other wonderful works for Broadway, Show Boat holds a unique place in American musical theatre history.

Following the success of Show Boat and another musical Roberta in 1933, Jerome Kern moved west to Hollywood, where he spent the majority of the rest of his career writing for film musicals. He was back in New York in 1946 to work on the musical Annie, Get Your Gun¸ when, three days into the project, he died of a heart attack. The music to Annie, Get Your Gun would eventually be one of composer Irving Berlin’s best-known shows.

Kern’s success and importance lay in his ability to stand equally on the shoulders of both Herbert and Cohan. Similar to Victor Herbert, the sing-able nature of Kern’s music at times hides the craftsman quality and harmonic complexity of his songs. The lyrics of the vernacular and the topical subject material gave the work a quality of relevance first explored by Cohan. As Cohan was influenced by ragtime, portions of Kern’s songs have the rhythmic feel and harmonic language of ragtime’s successor, jazz.

What was uniquely Jerome Kern was in the degree to which he melded style and substance. The subject material considered viable for musical theatre was dramatically expanded by Show Boat, which paved the way for Porgy and Bess, South Pacific and other dramatic musicals. The cohesive nature of Kern’s Princess musicals and those following helped American musical theatre outgrow its gawky adolescent years. Far from the patchwork musical scores and artificial spectaculars of musicals at the beginning of the 20th century, Jerome Kern’s work demonstrates integration, intimacy, and popular acceptance.

The impact of Jerome Kern extends beyond the wonderful musicals, film scores, two Academy Awards, and almost 700 songs written. He was a significant influence on a younger generation of musical geniuses: sixteen-year-old George Gershwin tried to emulate Kern’s style in his early songwriting attempts and fourteen-year-old Richard Rodgers spent all his allowance money to see a Kern musical almost a dozen times to absorb and learn what he could from his idol. A few years later Gershwin got one of his first musical jobs as a rehearsal accompanist for a Kern musical. Richard Rodgers would later write:

“No matter what I myself accomplished, I always felt I was continuing to build the same kind of musical theatre that Kern had helped to create. To me, the greatest gratification allowed anyone is to be able to gather a large group of people under one roof, and through words and music, impel them to feel something deeply and strongly within themselves. This was Kern’s mission and he accomplished it superbly.”