A close examination of American stage forms of the 19th century reveals at least one truth: no clear dividing lines existed between forms. Melodramas, minstrels, extravaganzas, spectacles, and the form known as burlesque overlapped and borrowed from one another heavily to create productions that were complex hybrids that seemed to fit into multiple stage categories, depending on which minute you might be watching the stage.

The concept behind the parodies found in the final act of the minstrel show was originally developed as part of a stage form known as burlesque. Although by the 1920s the term had become synonymous with bawdy strip shows where female performers teased and taunted the audience while simultaneously peeling layers of clothing off until in one ”flash” moment before the exit, a female was nude except for a G-string, the term burlesque was in its first form, a slightly less scandalous entertainment form.

The American form of burlesque evolved from a more staid, restrained British form which was built on endless puns and rhyming couplets. American burlesque shed the structure but kept the spirit of their British cousin.

Early burlesque shows were built around plots that were not too dissimilar to those created by the Marx Brothers for 1930s movies like Duck Soup and A Night at the Opera. Typical burlesque fare included mistaken identities, double- and triple-entendres, slapstick, roughhousing, chase scenes, pandemonium, sight gags, and an abundance of scantily clad females, all accompanied by irreverent songs and incidental music similar in occurrence, if not character’ to the memos used in melodramas. A typical three-act burlesque parodied politicians, the affluent, and the upper society, but the evening was often completed with a fourth ad called the ”Extra Added Attraction”.  While conservative theatre owners allowed only shows of strength or contests of self-defense, the more adventuresome theatres took the scantiness of the burlesque play one step further by featuring the more revealing ‘hoochie-koochie” dance. While tame by standards today, the revealing of certain parts of a lady’s anatomy was forbidden in public in the 1860s and ’70s. 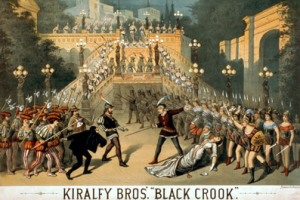 One show which evolved into the most popular burlesque show of the century came about completely by chance. The Black Crook was a melodrama flop with a ridiculous plot based on the legend of Faust. Simultaneous to the 1866 opening of The Black Crook, a French ballet company was preparing to begin a run of performances at the Academy of Music in New York City. Unfortunately, as the story (most likely apocryphal) goes, a fire in the Academy left the ballet troupe without a venue. The idea arose for the production of Crook to incorporate the French dancers as part of their production. The result was arguably the most important American musical stage production of the 19th century. The five-and-one-half hour production was widely seen by critics as a ”hodgepodge” with melodrama, music, specialty acts, dance, scanty costumes, and elaborate fairyland scenery. The producers of Crook reasoned that in those moments of the melodrama when the audience was either confused or bored they could send out the dancers in wispy outfits accompanied by songs like ”The March of the Amazons” or ”You Naughty, Naughty Men”. With music, dance, melodrama, and spectacle, The Black Crook became an instant success, running for 474th performances over sixteen months – numbers unheard of in the mid-19th century. The producer s initial investment of $50,000 yielded over a million dollars by the end of the run, causing it to be recognized as the first ”blockbuster production” of American musical theatre. 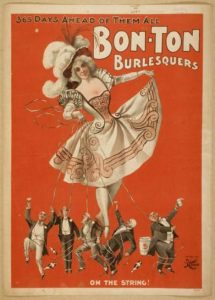 Undoubtedly aiding the popularity of Crook was the scandalous exposure of portions of the one-hundred female dancers’ bodies. Appearing without skirts, the dancers shocked the audience by wearing skin colored tights, making them appear to be bare-limbed. So scandalous was this that newspapers like the Evening Post resorted to cautious language to describe what transpired, saying that the dancers were ”perhaps less concealed than would be deemed proper by those of stout views as to where dresses should begin and end.”

The reports of risque elements and the resulting uproar, however, only fed the public’s desire to see the show. Some men attended the show in disguise and women with heavy veils so that they wouldn’t be recognized by their neighbors. One preacher forced himself to attend so that he could more accurately preach against

”… the immodest dress of the girls; the short skirts. undergarments of thin material allowing the form of the figure to be discernible; the flesh-colored tights, imitating nature so well (hot the illusion is complete; with the exceedingly short drawers, most tight-fitting,…arms and neck apparently bare, and bodice cut so as to make their undergarments spring up, exposing the figure beneath from the waist to the toe…”

In addition to the sixteen months run, Crook spawned many imitative productions attempting to ride its coattails. Copycat shows by other theatres included The Black Crook Jr., The White Crook, The Red Crook, and The Black Rook. The original Black Crook was to be revived at least fifteen times over the next forty years, each time playing to successful runs. Over that time period, ballet was replaced by more risque dance steps including the 1892 Crook revival with its high-kicking French dancers. Following the spirit of the first show, the dancers shocked the audience by borrowing techniques from the Follies Berger and lifted their legs in a kick line, exposing their inner thigh area and finishing with a series of splits. One of the final revivals in 1929 featured the debut of a young choreographer named Agnes De Mille, who would break new ground with her choreography in Oklahoma just twelve years later.

The importance of The Black Crook lay in that it was the first American theatrical production which presented a somewhat cohesive theatrical form comprised of a singular story (with beginning, middle and end), some original songs, instrumental underscoring, a chorus line, and perhaps most importantly, an impressive series of dance numbers with scantily clad young females. Stage productions prior to this had either omitted one or more of the elements or had been episodic and fragmented in their structure. The Black Crook found the path towards the successful amalgamation of theatrical ideas that was to become a new and unique form: the American musical.

Within months after the opening of The Black Crook, fourteen of the sixteen legitimate theatres in New York City had abandoned their melodramas, minstrel shows or spectacles to present shows patterned after Crook. In some way it was the beginning of what would be the rich tradition of musical theatre in America.

While Crook moved theatre towards more box office success and fitful bouts of legitimacy, true burlesque theatre was moving away from mainstream acceptance. By the end of the 19th century, burlesque shows consisted of essentially two elements: comedians and provocatively dressed (and undressed) young women. What began as comic plays with several characters buffoon-ing and slapstick-ing their way through an inane and zany plot devolved to stand-up comic teams built around ethnic humor, stereotypical characters, and bawdy comedy. What began as a chorus line of beautiful girls revealing limbs and more degenerated to a few sophisticated strippers, like Gypsy Rose Lee, who dressed provocatively and undressed sensually. It wasn’t so much organized dance as it was eroticized exhibitionism.

By the 1930s most of the comedians with any talent had either been hired by vaudeville or the movies, and by the mid-‘3os the strip-tease girlie shows were being banned. What had begun with stylized dancing and comedic antics had finally withered to a vulgar routine in front of smaller and smaller crowds of leering men gathered in darker and seedier venues.

The alumnae of comedians who graduated from burlesque at the turn of the century to vaudeville, movies and television is impressive. W. C. Fields, Abbott and Costello, Bert Lahr (the Lion in Wizard of Oz), Fanny Brice, and AI Jolson all made the transition to more acceptable mainstream performance venues, but the lessons learned in the era of burlesque served them well later in their careers.